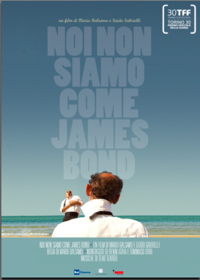 WE ARE NOTHING LIKE JAMES BOND
by Mario Balsamo and Guido Gabrielli
Italy, 2012, HD, 73′.

It was back in 1985 when Guido and Mario, good buddies, decided to take their first trip together. Thirty years later, the memories of that period overlap with their present life, for both marked by a long struggle against cancer. Nonetheless they decide to embark on a new adventure, a journey at once intimate and off the rails, rife with questions and considerations about their friendship, the meaning of life and sickness. From the windows of the conveyances which the twosome uses to hurtle through this sweet ‘road movie,’ the images of a changed Italy file by: the unexpected beach of their childhood at Sabaudia; the Perugia of an impromptu concert out on the streets during the Umbria Jazz Festival; the “Forest of the Introspective Spirits” at Borgotaro. And then Milan and Rome, the present domiciles of one and the other.

Dressed in tuxedos, aboard a vintage Mini rented for the occasion and then speeding along on Italian Intercity trains, they plan an improbable meeting with Agent 007, James Bond, their erstwhile superhero: invincible, unbeatable, immortal. Naturally we are referring to their one and only Bond, namely Sean Connery. The two friends have a special question they wish to ask him, the question of two grown-up kids: how do you become immortal? After a lucky tip from the first Italian Bond Girl, the ever-alluring and mysterious Daniela Bianchi, Guido and Mario get on the phone and seek out Sean to set an appointment that will sure clarify and illuminate. But one fine dawn of a new summer day, along the shore of an extraterrestrial sea, inside a cramped pup tent unused since 1985, comes the the long awaited response from Sir Connery…
Visita il sito ufficiale del film.