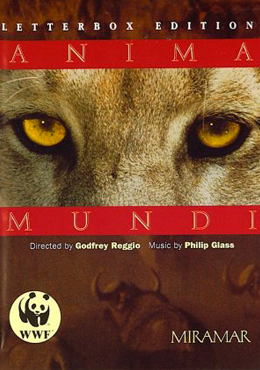 Anima Mundi is a poetic combination of music and images created from the finest existing footage from the naturalist film field, interwoven with original images and accompanied by a continuous soundtrack composed by Philip Glass based on rhythms and music from the most unspoiled traditional ethnic music.
This work was designed to celebrate the Biological Diversity Campaign of WWF and to create feelings and emotions which, through rich, striking and breathtaking images from Nature may lead its viewers to feel that they are truly a part of the natural world.

The title, ‘Anima Mundi’, reproposes a concept which, throughout the history of mankind from ancient times, conjures up a harmonic principle controlling the laws of life on earth in all its various forms and relationships. Natural order and beauty are based on differences and the endless variety of species, elements, beings and systems which together form a marvelous balanced and harmonious Whole.

Plato in his ‘Timeus’, was the first to provide a complete description of the anima mundi concept, passed down from ancient mythology:

“…Therefore, we may consequently state that: this world is indeed a living being endowed with a soul and intelligence … a single visible living entity containing all other living entities, which by their nature are all related.”
Plato, Timeus, 29/30; 4th century B.C.

Several ecological themes are firmly based on the idea of anima mundi, which attributes a cosmic breath to the earth. Nature, joyfully venerated for thousands of years by people all over the globe, supports the suffering of its generation simply because it is animated by a deeply rooted and mysterious vital force which justifies everything as well as the position of all elements in the complex order of nature.

Godfrey Reggio, the director of Anima Mundi, translated this concept into images to interpret WWF’s campaign on biological diversity: the concept of anima mundi forms the basis of this film and requires a stylistic type of poetic communication, which is both immediately and deeply felt as it emotionally expresses the myriad of meanings contained in this concept, rather than to simply describe and explain them. Godfrey Reggio’s intention is that of conjuring up a sense of the force of nature by following a path which goes beyond habit, calling forth the deep rooted and archaic sense of man’s ‘being a part’ of nature.