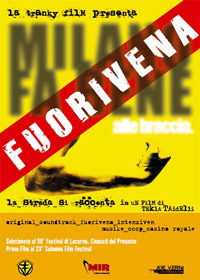 Tekla is a young punk that lives in a squat ‘Kascina Okkupata’ in the suburbs of Milan; she goes to movie school and his days are divided between lines of cocaine and ketamine and numerous Ceres. Her friends are all “skinless”, like her: punks and travellers, dropouts and junky, enemies of the “quite life” and the “safe jobs”! One morning, casually, she clashes against Zanna, a smart and cool guy, even though openly addicted to heroin. Attracted by his humour, and even more by his being so “borderline”, Tekla teases him and then seduces him, falling in love.

What springs out is a desperate melodrama, where the two young souls and life face each other with ruvid sincerity. Zanna, dwelling between his junkie life and his new passion, wants to be accepted for what he is. Tekla, even if she’s living her contraddiction, she answers firmly: it doesn’t matter that she is using cocaine and alchool, apparently, unlike Zanna, she can handles them. The girl impose him an aut-aut: if he doesn’t want to lose har, Zanna have to drop heroin. The death of a friend from his neighbourhood, same days later, convinces him to try to get clean with methadone, but when he finds out that Tekla is writing a movie on their love affair, Zanna goes back to his old friends and start shooting drugs again.

Who is right? Who is wrong? Zanna is a junkie without scruples that needed an alibi to go back to his “junkie routine”? Or is Tekla, who’s using Zanna to write her movie?

The end leaves the answers to the viewer: the hero can be the anti-hero, and vice-versa. What reamains is the love corrupted and unsolved story, the story of a junkie that leaves his last hopes in a punk, and the story of a punk that learns the nature of life, hard and appasionate, in a carousel of nasty boozed-up nights, illegal rave partys, tender streap tease under the Milan moonlight.