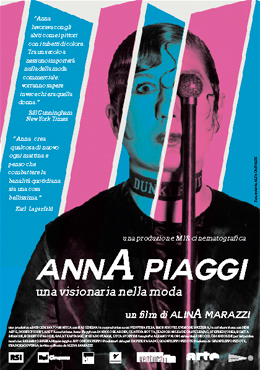 From the end of the 60s to the start of the new millennium, therewasone figure in the world of fashion who embodied its spirit and told its story live: the journalist Anna Piaggi, one of the most important voices of the international fashion system. Celebrated for her eccentric outfits and an intimate friend of designers Karl Lagerfeld, Dolce & Gabbana and Manolo Blahnik, Anna Piaggi was the living testament to the cross pollination of art, society and culture, changing fashion and proclaiming its success on a global scale.

The film retraces the story of this amazing journalist, touching on the capital cities of fashion – Paris, London, Milan – and making use of selected archive footage, unpublished photos provided by the archive of Alfa Castaldi – her husband and noted fashion photographer – and the testimony of some of the most known designers in the world.

In association with
Associazione Anna Piaggi