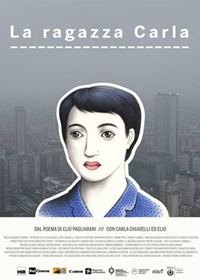 Carla is the widow daughter of widow Dondi, a woman of the smallest bourgeoisie who makes slippers to support the thin family budget.
The girl is enrolled in a vocational training school for typists. At school, he does what he has to do without a true passion or conviction. In the head he has other thoughts, other dreams and a great fear of throwing himself into the melee.
After completing the school Carla finds work at the Transocean Limited Import Export Company, a small company in Piazza del Duomo. It is directed by the mysterious Mr. Praték, who does not seem to have great respect for his employees and even makes explicit advances to poor Carla. She runs horrified by her mother to tell her that she no longer wants to know about that job.
But her mother says clearly that finding a job is not easy at this time, and her daughter can not afford to lose it. The story closes with Carla ready to face a new day of work, suspended between rejection of society and openness to life.
The poem stems from the strong impression that the metropolis aroused in the romanian Pagliarani, who arrived eighteen years later in Milan in the post-war period. At first he thought of writing a subject to be entrusted to De Sica and Zavattini (the years of Sciuscià and Bicycle Thieves), then elaborated over a decade the poem that was first published by Vittorini on Menabò at the end of the 1950s . The film hopes to realize the ambition of the Pagliarani boy.

Milan is far more than an adventure of the spirit: it is our environment time, the present condition,
from time to time accepted or fought, witnessed by always paying in person.
Elio Pagliarani.

In association with
Start srl